Where to See Floats, Lights, and Even Santa Himself: A Holiday Parade Guide

Holiday parades are starting to hit the streets this weekend, so get your lawn chairs and blankets ready for some holiday fun! 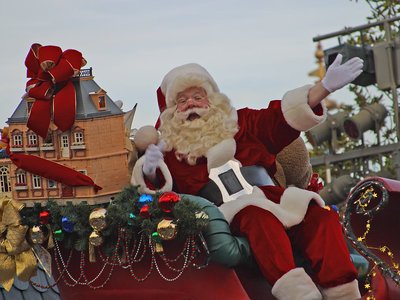 Across Long Island, various community groups have started to get their floats in motion for numerous winter parades.  Most parades revolve around Christmas and Santa, but there are other parades that are themed around lights and historical fun, such as Bellport’s Winterfest celebrations and the Charles Dickens Festival’s giant puppet parade in Port Jefferson.  Regardless of what holiday you celebrate, these parades are all guaranteed to be in good fun, and many culminate in a community gathering – some with free hot chocolate or other refreshments!

For the best seats and parking, go to your parade spot early, and be sure to bundle up. Also, don’t forget to thank your local community groups and fire departments for organizing the fun, and spend some quality time with your family as you watch your local parade.

Christmas Holiday Boat Parade
November 23, 6 p.m.
Patchogue River, Patchogue
Viewing areas will be set up at the Town of Brookhaven Sandspit Marina, Brightwood Street, Patchogue and the Watch Hill Ferry Terminal Facility, West Avenue, Patchogue.  Refreshments and music will be set up at each area, free of charge.

Holiday Parade and Miracle on Main
November 29, 9:00 a.m.
Main Street, Sayville
Santa’s workshop will be set up with interactive activities for kids, and visitors will see actors in Dickens-era attire, model train displays, and ice carvings.

Santa Claus Comes to Port Jefferson
November 29, 3:00 p.m.
Main Street, Port Jefferson
Santa will stop at the Drown-Meadow Cottage at the corner of Barnum and West Broadway for photo opportunities for kids.

Holiday Parade and Tree Lighting Ceremony
November 29, 7:00 p.m
New York Avenue by the Big H Shopping Center, Huntington
This parade will move north on New York Avenue to Main Street, then west on Main Street to West Neck Road.  At the end, there will be a chance for photos with Santa if you bring your own camera.

East Hampton Village Santa Parade
December 6, 10:00 a.m.
Main Street, East Hampton
East Hampton’s parade will start on Main Street and turn onto Newton Lane, ending before the railroad tracks.  There will be time for a photo op with Santa after the parade – bring your own camera.

Winterfest
December 6, 3:00 p.m.
Bellport Village
Bellport Lane, Bellport
The Christmas Parade of Lights will start at Bellport Middle School, head down South Country Road, and end at the fire house. Winterfest will feature photo ops with Santa, and many other activities for children.

Merry on Main Street
December 6, 4:00-6:30
Main Street, Islip
Islip’s holiday parade will start at Brookwood Hall and end at Town Hall West, where it will culminate in a tree lighting with Santa, a craft fair, photos with Santa, a holiday movie, family skating, a gingerbread competition, and more outdoor entertainment.

Bohemia Christmas Parade
December 7, 5:00 p.m.
Bohemia Rec. Center
1 Ruzicka Way, Bohemia
The parade kicks off at the Boehmia Recreation Center, and heads down Smithtown Avenue to the firehouse at Pearl Street, and will include civic groups, horses, and floats from nearby fire departments and ambulance companies.

Medford Christmas Parade and Tree Lighting
December 7, 4:00 p.m.
Tremont Avenue School
143 Tremont Avenue, Medford
Stick around after this parade for the tree lighting, and the Medford Volunteer Fire Department will serve hot chocolate and cookies to all attendees.

Center Moriches Fire Department Holiday Parade of Lights
December 13, 6:00 p.m.
Montauk Highway and Lake Avenue
Center Moriches
The Center Moriches FD Parade travels east to Ocean Avenue.  Be sure to look for your local community groups and Santa on the tower ladder at the end of the parade.

Annual Nautical Mile of Lights Boat Parade
December 6th at 7 PM
Captain Lou Fleet,
28A Woodcleft Avenue, Freeport
Sail aboard the Capt Lou Fleet for an hour in our parade of lights cruise ! Tickets are $10 adults $5 children 12 and under * Holiday Lights & DJ Holiday Music along with Fresh Hot Chocolate.