Cuomo Announces Restaurants, Bars and Other SLA-Licensed Entities Must Close In-Person Service from 10PM to 5AM Daily 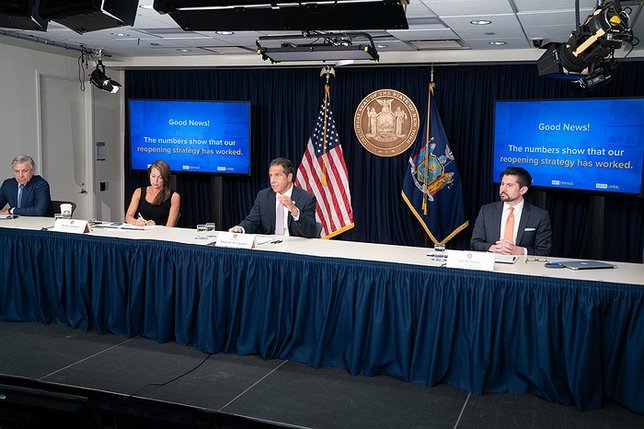 Effective Friday at 10 p.m., bars, restaurants and gyms or fitness centers, as well as any State Liquor Authority-licensed establishment, will be required to close from 10 p.m. to 5 a.m. daily. Restaurants will still be allowed to provide curbside, food-only pick-up or delivery after 10 p.m., but will not be permitted to serve alcohol to go. The State Liquor Authority will issue further guidance for licensees as to what sales are continued to be permitted.

The Governor also announced that indoor and outdoor gatherings at private residences will be limited to no more than 10 people. The limit will be implemented due to the recent prevalence of COVID spread resulting from small indoor gatherings including Halloween parties. These gatherings have become a major cause of cluster activity across the state. Further, this public health measure brings New York State in line with neighboring states including Connecticut, Massachusetts and Rhode Island. This new rule is also effective Friday at 10 p.m.

“If you look at where the cases are coming from, if you do the contact tracing, you’ll see they’re coming from three main areas: establishments where alcohol is served, gyms, and indoor gatherings at private homes,” Governor Cuomo said. “The reason we have been successful in reducing the spread in New York is we have been a step ahead of COVID. You know where it’s going; stop it before it gets there. And you know where it’s going by following the science. This is the calibration that we’ve talked about: increase economic activity, watch the positivity rate – if the positivity rate starts to go up, back off on the economic activity. It was never binary — economic activity or public health — it was always both.”

The Governor took these actions amid a widespread increase in cases throughout the nation and an increase in New York, which was expected moving into the fall and winter seasons.