Come enjoy the festival of lights! Starting the night before Thanksgiving, Hanukkah is celebrated by many families on Long Island. So see a menorah and celebrate the Festival of Lights! 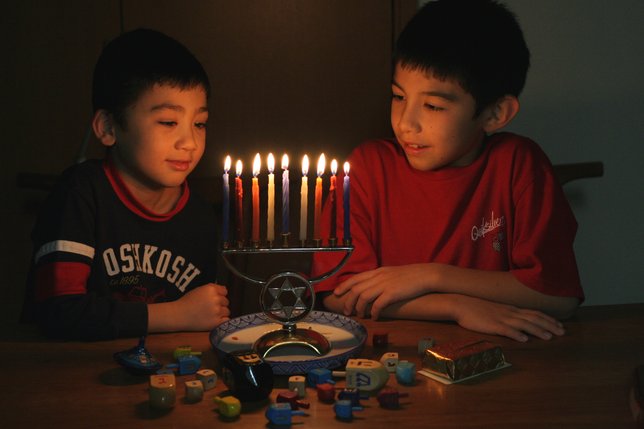 It does not matter how you spell it, Chanuka, Chanukah, Chanukkah, Channukah, Hanukah, or Hannukah, this Jewish holiday is known to be the Festival of Lights. The holiday changes based on the lunar calendar and this year it is from November 27th to December 5th.

Hannukah is the holiday for the rededication of the Temple after its destruction. Every year, it is tradition to light the menorah every night for eight nights. The reason for this is as they were rededicating the Temple, there was only enough oil for lighting the menorah for one night. However, the oil miraculously lasted eight nights. Now it is traditions for the menorah to be light every night; one candle on the first night, two candles on the second, and so on until the eighth night of Hannukah.

In addition to the menorah lighting tradition, there is also the tradition to eating fried food like latkes or potato pancakes. Why fried? It is cooked in oil! Then there is the drediel that is played during the holiday. Marked with the Hebrew letter of Nun, Gimmel, Hei, and Shin, the drediels give the message "A Great Miracle Happened There." Using coins or chocolate, each side of the drediel stands for different amount you win from what you bet. Rules vary, but it is still a fun activity after lighting the candles.

Long Islanders can celebrate Hannukah in their homes or at the various events taking place on the island this November. So check out of the great events going on this Hannukah season:

Do you know any other Hannukah events going on here on Long Island? Let us know by email and post the event on the events calendar!