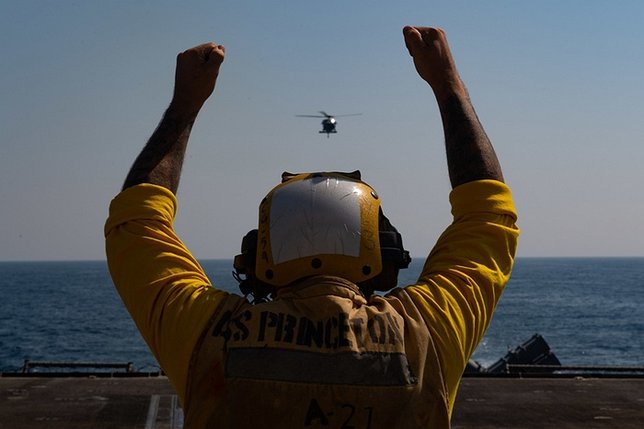 In the photo, Boatswain’s Mate Seaman Chris Larusso, from Lindenhurst, N.Y., signals to the pilots of an MH-60S Sea Hawk helicopter, from the “Screamin’ Indians” of Helicopter Sea Combat Squadron (HSC) 6, during a vertical replenishment-at-sea with the guided-missile cruiser USS Princeton (CG 59) in the Arabian Gulf, Oct. 31.

Princeton is part of Nimitz Carrier Strike Group and is deployed to the U.S. 5th Fleet area of operations to ensure maritime stability and security in the Central Region, connecting the Mediterranean and Pacific through the Western Indian Ocean and three critical chokepoints to the free flow of global commerce.