With just over a week left before Halloween, Adventureland provides a multitude of seasonal attractions to those seeking thrills and chills. 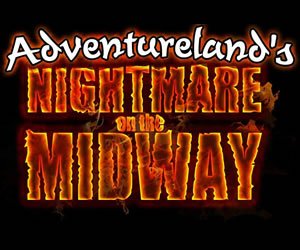 For over half a century, Adventureland has stood as one of Long Island’s most popular amusement parks, delighting patrons with fast rides alongside many other attractions. The park is open all summer long, but when a chill begins to fill the air it undergoes a transformation, eschewing a few of its more traditional rides to let the spirits of Halloween enter and take hold.

Upon entering the park, visitors are greeted by a large, imposing dog which will leap up to bark at any passersby; fortunately he is secured by a sturdy leash. There are many costumed men and ghastly creatures wandering about the midway, patiently waiting to sneak up on any patrons who have left their backs turned for too long. Several towering monsters occupy the front of the park, including the affectionately named Fluffy—a large, horned demon with a taste for human limbs.

Once past the entranceway, there are several different haunted attractions awaiting all those who have crossed the gates. The Ghost House, a piece of the park which is open year round, has gotten a facelift and is well worth a visit, as it remains one of the most detailed haunts on the park grounds. Many of Adventureland’s best animatronics are packed into this ride, including a few which will come to life when least expected. Furniture will shake, the walls will rattle, and inanimate objects will become quite animated as your carriage is pulled through this creepy building.

After departing the Ghost House, the Evil Express is only a short distance away. This train runs every ten minutes, providing guests a tour of the park’s outskirts. It begins innocuously enough, giving riders a view of the other rides and attractions, as well as a decent look at Slappy’s Sadistic Circus where demented clowns have set up shop and taken over the back of Adventureland. As the ghost train rounds its second turn, however, the creatures of the night begin to rear their heads, many of them jumping to life from a perfect stillness and others rushing the train to try grabbing hold of a fresh victim. This is one of the longer attractions at the amusement park, and will continuously build in tensions as more props and actors appear the further riders take the train.

When the Evil Express returns to its station, patrons are roughly equidistant between two other haunts—the Zombie Asylum and an Antique Cars ride. The cars, like the first two attractions, are a ride on rails which has been redesigned for Halloween. Many eerie ghouls lurk around this tour through a small wooded area, including a rather passionate grave digger who gave one of the best performances of our visit.

The Zombie Asylum is the spookiest part of Adventureland this year, and may be worth saving for the end for any haunters hoping to end the night on a good scare. Outside the Asylum visitors are given a video introduction by a newscaster detailing the circumstances of the undead outbreak—he is cut short as his studio comes under attack, and a silent host outside the entrance motions for his guests to enter the building.

Inside awaits a traditional walk-through haunted house. Zombies and other fiends will emerge from the shadows to shock and scare anyone brave enough to enter, as they do through much of the amusement park, but here they are at their most frightening. The enclosed nature of the Asylum allows for better control of lighting than the outdoor haunts can provide, and is used to obscure those who hide inside until they are ready to rise up in hopes of snatching a brain or two to eat.

Adventureland’s Nightmare on the Midway harbors a number of spooky attractions and makes for a fun night out with friends or family (though the daytime activities may be better suited for younger children than the nighttime haunts). If your party is still craving some thrills after going through all the haunts, the park has kept many of its regular rides open as well, including the frisbee, Hurricane Coaster and, for the kids, the ladybug coaster looked prepped and ready to go during our visit.

For more information on Adventureland: Nightmare on the Midway, including hours, pricing, and location, click here!
For reviews of other LI Haunts click here.

This review was made possible by our partners at LIHauntedHouses.com!