All About Pumpkin Carving for Fall!

Get a history lesson on the origins of Jack O' Lanterns and some tips on how to make your own! 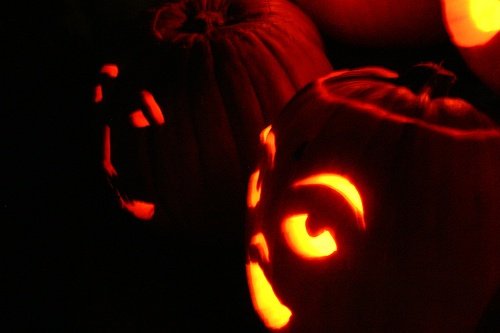 Picking fresh pumpkins from local pumpkin patches is a big Fall to-do. They come in all different shapes, sizes, and colors, making each pumpkin unique in its own way. This popular seasonal activity gives people the chance to choose and take home their favorite gourd. Then they can make homemade pumpkin flavored food and drinks from their fresh pickings, or create their very own Jack O’ Lantern!

The phrase Jack O’ Lantern itself comes from an Irish folktale about a man named Stingy Jack. One day Stingy Jack, true to his name, convinced the Devil to turn himself into a coin to pay for some drinks that they had ordered so he did not have to pay. The Devil obliged and Jack tricked the Devil by keeping him in coin form right next to a silver cross, which prevented the Devil from changing back to his true form. Jack kept up this charade for a while but eventually freed the Devil under the condition that once he died the Devil could not claim his soul.

Legend goes that after Jack did die neither God nor the Devil would accept him into their realm. Instead he set off into the night with only a burning coal to light his way. While travelling the Earth stuck in this limbo, Jack placed the lit coal into a carved out turnip and used that to light his way. The Irish began referring to this turnip carrying fellow as “Jack of the Lantern” which eventually became Jack O’ Lantern.

In Scotland and Ireland people started to make Jack O’ Lanterns out of potatoes and turnips, in England they use large beets,  carving scary faces into them to scare away any evil spirits, like Stingy Jack himself. Immigrants then brought these traditions to America and we began using pumpkins, our own native fruit.

To actually carve up your own pumpkin you’ll need a few tools. You can do it the old fashioned way, with a knife to cut the design and a spoon to scoop out the guts, with a handy kit, or with a drill.

The old fashioned way is more time consuming and, when it comes to kids, requires parental assistance.  Kits are helpful because they come with instructions, patterns and kid-friendly tools. They also usually have a website with even more patterns and ideas for your pumpkin. The drill works well because it pierces smoothly through the pumpkin making it easier to manipulate and create the look of your choice.

No matter how you decide to decorate your pumpkin this year, remember to have fun with it!