How a Long Island Company is Leading the Fight Against AIDS

Medford-based Chembio just got a $20M loan that it hopes will help it grow to $100 million in sales of diagnostic tests used to fight AIDS and other infectious diseases. 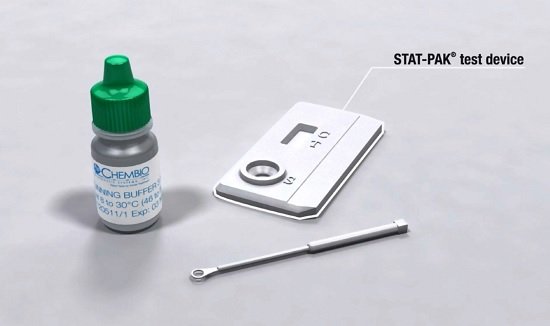 This simple device made by Chembio is a tool at the forefront of detecting HIV and fighting AIDS.

The company recently got a vote of confidence, when it obtained a $20 million loan that it plans to use to grow its business – to as much as $100 million in sales, as it fights AIDS and other ailments.

The company, a major player in the global battle against AIDS, said it closed on the loan with an affiliate of Perceptive Advisors, which Chembio called one of the world’s “leading health care-focused investment firms."

“We are excited to have received this capital from Perceptive Advisors, a prestigious and well-regarded healthcare investment firm.” Chembio CEO John Sperze.

Sperze said this “provides flexibility to grow our business as we advance toward our 2023 revenue target of $100 million.”

He added that the loan also “materially strengthens our balance sheet, while significantly limiting any dilution to our current shareholders.”

Chembio is playing a major role in battling illnesses, such as AIDS, around the world, by helping to identify the disease, so it can be treated.

Diagnosis and detection have long been viewed as key steps, indicating when and where to initiate treatment.

Chembio's HIV 1/2 STAT-PAK tests, for instance, are easy-to-perform, single-use products that in 15 minutes can detect  HIV at the point of care .

The tests can be used with plasma, serum and blood from finger sticks as well as puncturing veins.

Chembio plans to use the funds from the recent loan to expand commercialization of tests, broaden its product portfolio and geographic reach; increase research and development as well as consolidate and expandi its U.S. facilities and automate its U.S. manufacturing.

The loan has a four-year term, with no principal payments required during the initial three years.

It includes an annual rate of 8.75 percent plus the greater of one-month LIBOR and 2.5 percent.

Chembio said it also issued to Perceptive Advisors a 7-year warrant to purchase 550,000 shares ofor $5.22  per share, based on the 15-day volume weighted average price of the stock as of the day prior to closing.

Founded in 1999, Perceptive Advisors today manages more than $4.25 billion, targeting the life sciences industry, including what it calls the “most promising technologies in modern health care.”

The company manages about $1 billion in funds extended through private credit, and provides customized debt financing solutions to what it calls “innovative health care companies.”