From Planes to Flight: August 19th is National Aviation Day!

August 19th is National Aviation Day! Check out the various ways to celebrate the science of aeronautics. 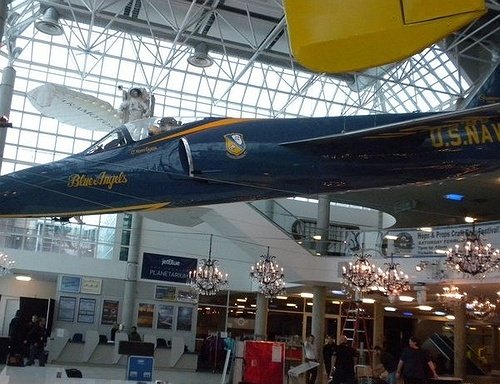 In 1939, by presidential decree, August 19th, Orville Wright's birthday, became known as National Aviation Day. The day was created to promote activities that will spring interest in aviation.

Technology has come a long way and, now, flying is frequent and, for some, a necessity. Flying may be common, but there is years of science behind the development of planes. Because transportation is so important to our nation, there is still a need for research and advancement in aeronautics, the science of flight.

Long Island has a rich history of aviation. Charles Lindbergh took her historic flight from Long Island to Paris, changing the world of aviation with introducing the ability to fly overseas. Also, a lot of naval aviation took place on Long Island. The names of Grumman and  Republic might sound familiar because they were apart of the aviation development.

So, celebrate the science of aviation in anyway you feel you can. You can simply making paper airplanes! But, if you need a more hands-on experience, check out the great museums and locations to celebrate and learn about aviation.

How will you celebrate National Aviation Day? Tell us in the comments below!