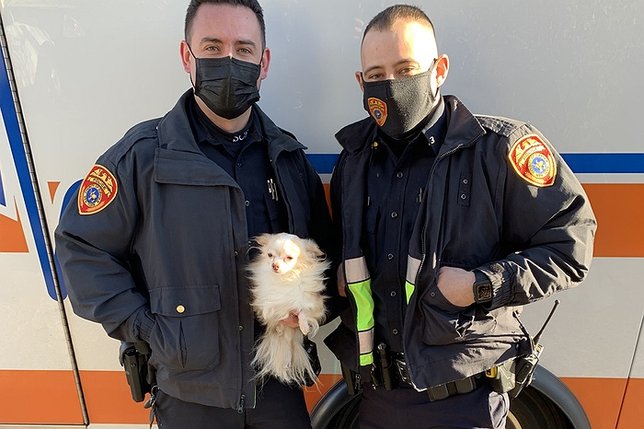 Officers Sergio Rivera and James Galanos responded to a house fire on 3 Oak Street at approximately 3:10 p.m. Upon arrival, two children were exiting the front door of the home when they alerted the officers their cat and dog were inside.

The officers made entry through the back of the house, and saw Tiger, a two-year-old male cat run away from the fire towards the basement door. Due to the smoke, the officers could not locate the dog. The officers then heard JJ, a two-year-old male Chihuahua whimpering near a couch, where they found him inside a cage, in close proximity to the fire. Officer Rivera grabbed the cage and he and Officer Galanos exited the house along with the dog.

A short time later, Officer Galanos went back into the home, and found Tiger, in the basement.

The animals, as well as the 11 and 13-year-old males were not injured.

The Central Islip Fire Department extinguished the fire. Arson Section detectives are investigating the cause of the fire. The Islip Town Fire Marshal responded.