The giant metal, wood, and canvas Halloween witch has been a staple since 1976. 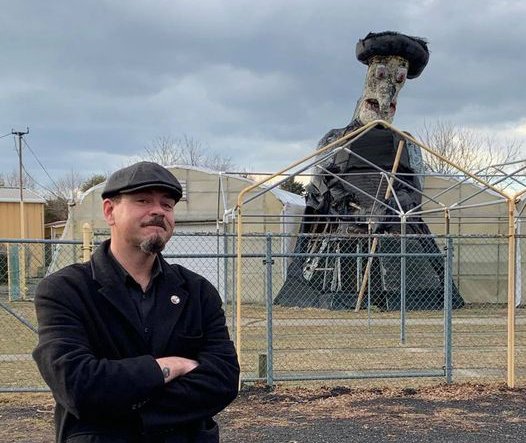 If you have ever driven down Route 25a through St. James, then you’ve most likely spied the massive metal figure set among the greenhouses at Wicks Farm. Since 1976, in one form or another, the 30-foot Halloween witch named Winnie has been delighting motorists and visitors to the garden center. The attraction is such a mainstay that it’s listed on RoadsideAmerica.com, a website that features interesting and offbeat tourist attractions.

The current incarnation of Winnie the Witch has seen better days and one man has started a campaign to restore her to her former glory. Using a hashtags #savewinnie and #savethewitch on social media, Kenny Maher has been sharing a Go Fund Me campaign to raise the money to give her the makeover she deserves as a local celebrity.

“I am taking on a huge task and will be needing as much help as possible,” he writes on the campaign’s page. “The Wicks family has given their blessing, and I am proud to announce that I will be starting the campaign to restore Winnie the Witch that has been our town's roadside attraction since 1976. Hurricane Sandy has really beaten her up structure wise. I would love to bring our town and our residents together by keeping this witch alive for our children’s children ...... although this is in its first baby steps..... I will continue to keep you all posted and hope to have our beloved Winnie restored."

If you want to help restore Winnie the Witch click here.