Legislator Trotta claimed that for years marijuana has been called the “gateway” drug. 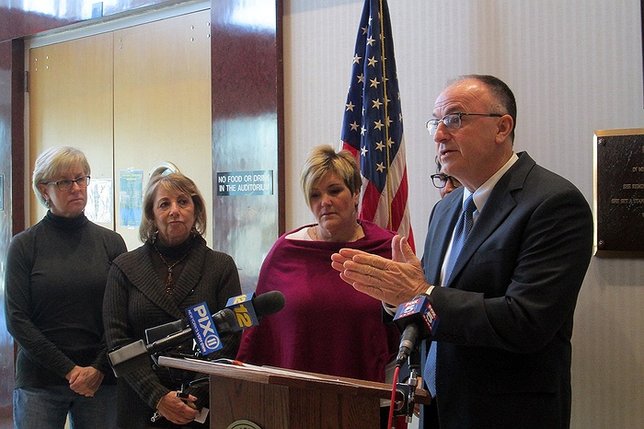 Smithtown, NY - February 4, 2019 - “It used to be that organized crime controlled gambling and drugs and now it’s the government who wants to use it as a revenue source and that is just wrong. The government should control spending and stay out of the drug business,” said Suffolk County Legislator Rob Trotta at a recent press conference in Hauppauge.
Legislator Trotta claimed that for years marijuana has been called the “gateway” drug to cocaine, heroin and other lethal drugs and so many young people have lost their lives to an overdose throughout Suffolk and Nassau Counties. Trotta is proposing that Suffolk County take the initial steps to opt out of Governor Cuomo’s statewide proposal to make it legal to sell and use commercial/recreational marijuana.
“Having been a police officer for 25 years, I know firsthand that making marijuana available for sale is a step in the wrong direction,” said Legislator Trotta. “I don’t view the sale of marijuana as a viable source of revenue because the health and well-being of our residents are far more important than plugging the holes in our bloated budget,” added Trotta.
“The Long Island Council on Alcoholism and Drug Dependence (LICADD) thanks Legislator Robert Trotta for his efforts to establish regulations and parameters that will limit accessibility and the potentially harmful distribution of potent strains of marijuana and THC products in Suffolk County that will undoubtedly have an adverse impact on communities and public health in Suffolk County. We are hopeful that the New York State movement towards legalization of marijuana will include adequate allotments of funding to insure evidence based education and prevention models addressing the potential dangers of marijuana products and that accurate information is disseminated to Long Island residents, with a specific educational focus on adolescents and young adults,” said LICADD Executive Director Steve Chassman, LCSW,CASAC.
Legislator Trotta’s colleagues, Legislators Leslie Kennedy (R-Smithtown, NY) and Kevin McCaffrey (R- Lindenhurst) have joined him as cosponsors of this resolution.