The press conference discussed a variety of topics impacting the state’s transportation and infrastructure. 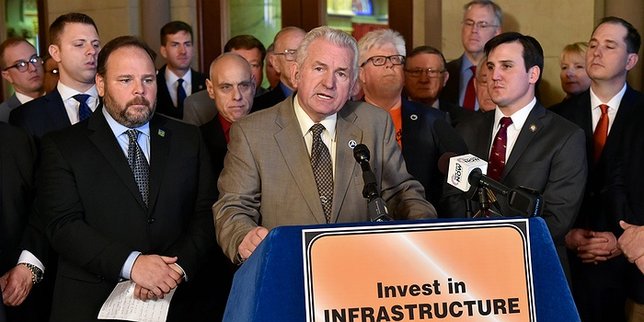 Long Island, NY - January 30, 2019 - Today, Assemblyman Joe DeStefano (R,C,I,Ref-Medford), joined by fellow members of the Assembly Minority Conference, attended a press conference held by the Assembly Minority Task Force on Critical Infrastructure and Transportation. The press conference was led by Assembly Minority Leader Brian Kolb (R,C-Canandaigua) and Task Force Co-Chairmen Assemblyman Phil Palmesano (R,C,I-Corning) and Assemblyman Kevin Byrne (R,C,Ref-Mahopac) as a follow up to the eight regional forums that discussed a variety of topics impacting the state’s transportation and infrastructure and announced the results released within “NEW YORK’S INFRASTRUCTURE: A Report on Fortifying Our Roads, Bridges and Water Systems.” The conference has plans to introduce a comprehensive package of bills to improve funding for the state’s roads, bridges and water and sewer systems.
“As a member of the Committee on Transportation, I am proud that the Assembly Minority Conference is the driving force for fixing our state infrastructure. We currently rank seventh for the worst infrastructure in the country. Our roads, bridges, waterways and sewers are the foundations of our state and it is imperative that we devote funds to them before it is too late,” said DeStefano.