Supervisor Chad A. Lupinacci lighted Huntington Town Hall in blue on January 5 in coordination with The Safe Center LI to bring awareness to National Slavery and Human Trafficking Prevention Month 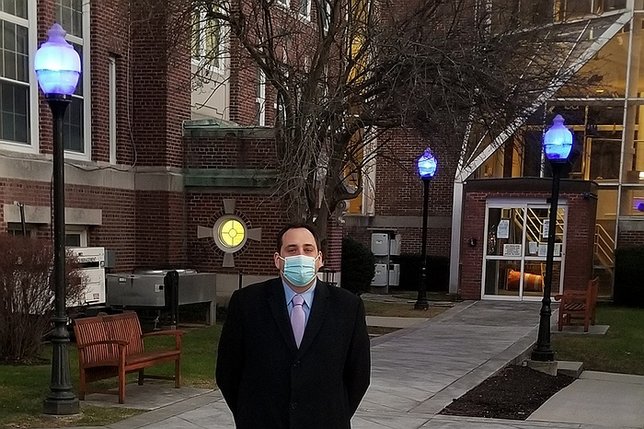 “Human trafficking is a modern-day form of slavery and it is an issue that is closer to home than most people are aware of,” said Supervisor Chad A. Lupinacci. “More than 120 human trafficking survivors on Long Island have been rescued over the past ten years, and we need to be aware of the signs and tactics used by these criminals.”

“Human Trafficking is an issue that is actively going on in our own backyards. The first step in eradicating this issue is to gain knowledge on how to recognize the signs of trafficking. The Safe Center applauds the efforts of the Town of Huntington for taking a stance against Human Trafficking. We look forward to partnering with the Town of Huntington to host upcoming virtual awareness events on how to recognize trafficking,” said Keith Scott, Director of Education, The Safe Center LI.

More information and registration for the free Virtual Long Island Human Trafficking Conference can be found at http://tscli.org.

January is National Slavery and Human Trafficking Prevention Month. Human trafficking is a crime in which force, fraud or coercion is used to compel a person to perform labor, services or commercial sex. It affects all populations: adults, children, men, women, foreign nationals and U.S. citizens, and all economic classes. The Defense Department continues to raise awareness and do its part to end this crime.

The Safe Center is a nonprofit organization located in Bethpage that provides free, confidential, and comprehensive services for victims of abuse and assault and their non-offending family members – children, women, men, elderly, LGBTQIA+. Its Education Department presents educational trainings and programs in both Nassau and Suffolk Counties on topics of abuse and neglect for children, teens, college-aged students, parents, professionals, and other concerned adults.