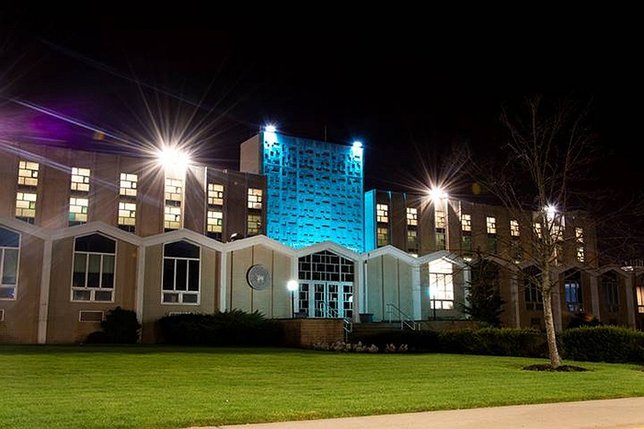 January 2021 is National Slavery and Human Trafficking Prevention Month, which coincides with the Department of Homeland Security’s annual “Blue Campaign” — a national public awareness effort to educate the public to recognize the signs of victims of human trafficking. To raise awareness, the center façade of the Suffolk County Sheriff’s Office Correctional Facility in Riverhead will be lit up in blue lights throughout the month of January.

Suffolk County Sheriff Errol D. Toulon, Jr. has embraced the Blue Campaign in a big way this year, because, he said, “Human trafficking is happening in Suffolk County and in communities across the country. Most often these victims are women who are vulnerable due to a substance abuse issue and they may have had several traumatic experiences throughout their lives. It’s not uncommon for youth in the foster care system to fall victim to traffickers, but men and women from all backgrounds can become victims.”

In addition to the blue lights, the Sheriff announced that he has restarted the inmate emergency mask assembly program. County inmates have dyed, cut, sewn, and strung over 2,000 blue masks to have available for January. These masks were recently distributed to the Long Island Coalition for the Homeless, the Empowerment Coalition of Long Island, Safe Harbor Mentoring, the SCPD Human Trafficking Investigations Unit, Axis Church, Suffolk County Probation and other groups and individuals. Beginning January 4th, the blue masks will be available at all public entrances at the Riverhead and Yaphank facilities (while supplies last). Sheriff’s Office staff, including those in Sheriff’s Anti-Trafficking Initiative Unit, will also be wearing the blue masks in January to increase awareness.

Sheriff Toulon started The Sheriff’s Anti-Trafficking Initiative Unit in 2018 and it was the first of its kind in the country operating from inside a correctional facility. The principal objective is to ensure that all victims of human trafficking who pass through the Suffolk County Correctional Facility are identified and have access to the services they need to recover. Additionally, they are supported throughout their long-term journey as survivors with the help of the S.T.A.R.T. Resource Center on the grounds of the Yaphank Jail, and through many non-profit service providers partnered with the Sheriff’s Office. Since Inception, S.A.T.I has conducted over 2200 inmate interviews, identified 176 human trafficking victims and 120 perpetrators. Criminal investigations against these traffickers are coordinated with local, state, and federal partners working with the Suffolk County Anti-Trafficking Initiative.